When Ethereum 2.0 with PoS is released, ETH miners will have few options 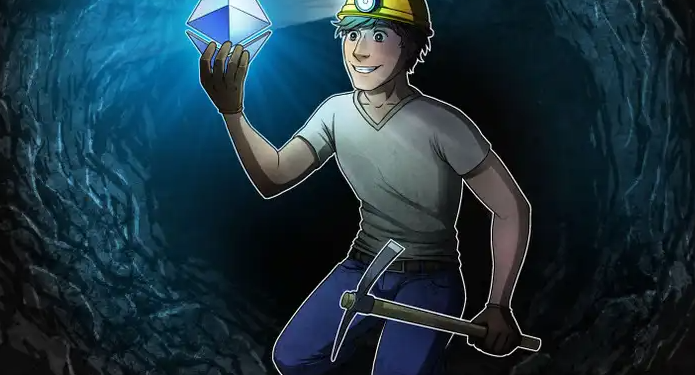 What will happen to ETH miners if Ethereum becomes a proof-of-stake network, and what will they do?

As Ethereum 2.0 is finally poised to debut later this year, putting an end to a lengthy string of delays, the network will begin to shift toward a proof-of-stake architecture.

As a result, the network will discontinue use of the proof-of-work consensus process, leaving Ether (ETH) miners with limited choices. They will be compelled to start mining altcoins or recertify as ETH stakers since their equipment will become outdated. So, what is the present condition of ETH mining, and what will the sector face as a consequence of the approaching transition?

Ethereum’s consensus is now built on a PoW algorithm, which is comparable to Bitcoin’s (BTC). As a result, the mining process for Ethereum is largely comparable, with miners using their processing capabilities to collect incentives for each block they finish.

There is, however, a significant distinction between both processes. While Bitcoin mining has become almost entirely reliant on ASICs — large, loud machines designed specifically for cryptocurrency mining that are mostly clustered in areas with cheap electricity — Ethereum’s PoW hashing algorithm, known as Ethash, has been designed to favor GPU units issued by global chipmakers such as Nvidia and AMD. As Thomas Heller, the worldwide business director of cryptocurrency mining pool F2Pool, noted in an interview with Cointelegraph: “GPUs are more cheaper and more accessible than ASICs.”

“Because ASICs are highly specialized devices, when a new generation is produced, it is often accompanied by a significant technological leap.” As a result, their hash rate is substantially greater, and their energy efficiency is superior to the previous generation. That suggests the producers spent a lot of money researching and developing it. Their computers are often fairly costly, while GPUs are far less expensive.”

Heller went on to say that individuals who use GPU miners “have a lot more freedom in what you can mine.” For example, a popular alternative is an Nvidia GeForce GTX 1080 Ti card, which can mine more than 15 different currencies, but ASIC machines typically support just one.

Nonetheless, the Ethereum network is vulnerable to ASIC miners, at least in its present incarnation. Bitmain announced the Antminer E3, an ASIC designed particularly for Ethereum mining, in April 2018. Despite being a generally successful model with a hash rate of 180 megahashes per second and a power consumption of 800 Watt, the Ethereum community has had conflicting opinions. A significant portion of GPU rig owners seemed to have lost earnings after ASICs were put in, and some were even compelled to migrate to alternative networks.

“The Whitepaper states that ETH will be ASIC resistant. “I hope that whitepaper means anything,” one of the top comments in a r/EtherMining discussion about the Antminer E3 shortly after it was revealed. A another Reddit member stated, “800 USD only for 180mh.” “Hardfork or die,” says the narrator.

See also  Crypto users in Africa are expected to increase by 2,500 percent by 2021, according to a new report

Some Ethereum users went on to say that Bitmain’s mining hardware might lead to increased centralization, increasing the likelihood of a 51 percent assault. Soon after, a group of engineers suggested “programmatic proof-of-work,” or ProgPoW — an enhancement of the existing Ethereum algorithm, Ethash, aimed at making GPUs more competitive and so encouraging decentralization.

According to a March study co-authored by Kristy-Leigh Minehan, a co-creator of the ProgPoW, Bitmain ASICs produce around 40% of Ethereum’s hash rate. Poolin’s vice president, Alejandro De La Torre, verified to Cointelegraph that “GPU mining is still dominating” for the Ethereum network, adding:

“At the moment, the profitability of ETH mining is low, and the management threshold and cost of GPU devices are greater than those of Asic devices.” However, as compared to Asic devices, GPU devices are more adaptable, since you may swap to various currencies with different algorithms.”

ProgPoW has not yet been implemented into Ethereum, and it is uncertain when it will be – in March, key Ethereum developers debated whether ProgPoW would truly improve the network for over two hours and were unable to reach an agreement. Notably, a Bitmain spokesman earlier informed Cointelegraph that the mining hardware giant has no plans to prolong the Antminer E3’s lifetime beyond October 2020: “As far as we know, mining will finish around October or later.”

A secure yet uncertain future

In fact, Ethereum will transition away from mining in the future. Ethereum 2.0, which is set to deploy later in 2020, is a significant network update on the blockchain that is intended to move the blockchain’s existing PoW consensus process to PoS, where miners are virtual and referred to as “block validators.”

More precisely, they are chosen at random while taking into account members’ wealth in the network, or their “stake.” In other words, the more coins PoS validators stake, the more coins they get as a reward.

According to Ethereum co-founder Vitalik Buterin, the network will become more secure and costlier to attack as a consequence of the shift, despite the fact that the argument over whether consensus method is preferable has been raging in the crypto industry for years. However, it is uncertain when Ethereum 2.0 will be released, since several bugs and management issues are apparently delaying the process.

Another ostensible advantage of a PoS system is that it consumes much less energy than PoW blockchains. According to Digiconomist statistics, the cryptocurrency’s annualized overall footprint is 59.31 terawatts per hour, which is similar to Greece’s total power usage. However, Bitcoin may not be as harmful for the environment as it seems, according to a July 2019 analysis that indicated 74% of Bitcoin mining is done using renewable energy sources.

What will happen to real-world Ethereum miners? According to the Casper upgrade whitepaper, which is part of the Ethereum 2.0 roadmap, the network will initially support a hybrid approach that includes both PoW and PoS, giving some room for both block validators and GPU/ASIC miners. “There will undoubtedly be a transition phase when both networks are operational,” Jack O’Holleran, CEO of the Skale Network — an Ethereum-based blockchain platform — told Cointelegraph, adding that this process will take some time:

“It will undoubtedly take time for the bulk of ETH1 to migrate to ETH2 – maybe years rather than months.” The good news about the transition’s sluggishness is that DApps and DeFi platforms will be allowed to migrate at their leisure based on real-world proof of feasibility, security, and acceptance. This is beneficial to the Ethereum ecosystem.”

Should I mine or should I not mine?

Miners will have two alternatives once Ethereum is fully operational on the PoS rails. The first option is to sell the equipment and utilize the proceeds to collect more ETH and begin staking, while the second option, which is only open to GPU miners, is to simply move to other Ethash networks and mine altcoins. According to Nick Foster, a spokesman for the United States-based mining equipment reseller Kaboomracks, most ETH miners will choose the latter option:

“I would suggest that the majority of miners are not interested in mining for ETH or a particular currency.” Yes, some mine and hold, but I would argue that a big majority of altcoin miners holds their money for any length of time.”

Foster went on to explain how, after mining ETH became unprofitable, he resorted to mining Ravencoin (RVN), an Ethash peer-to-peer blockchain asset, using his 3GB GPU unit: “It’s mining raven, and I sell to BTC instantaneously for stability reason and sell to USD to pay my electricity soon after.” I’d think that a lot of individuals use a method like this.”

As Foster explained, ETH miners are expected to leave the network, while new participants — those who did not invest in power infrastructure or rigs — will be staking ETH. He went on to explain the following scenario:

“I can’t image how much of a jerk I’d be if I discovered a five-year lease with $0.04 electricity and was mining ETH and chose to sell everything and simply keep paying my lease so I could stake ETH as a replacement.”

In an interview with Cointelegraph, Marc Fresa, the creator of mining firmware startup Asic.to, concurred with that sentiment: “If you’re involved in mining, you don’t want staking since you have the buildout for it.”

Ethereum Classic (ETC), a more conservative version of the blockchain that supposedly has no PoS-related ambitions, is one of the key altcoins that may gain from PoW miners quitting Ethereum. Because it also uses the Ethash algorithm, its hash rate may undergo a considerable increase as a consequence of miner migration prompted by the Ethereum 2.0 launch.

Larger mining pools for ETH have comparable possibilities. When questioned about his business’s post-PoW intentions for Ethereum, Heller informed Cointelegraph that, after the news of the Ethereum PoS update, F2Pool created a sibling company called stake.fish earlier in 2018. Because the changeover has been repeatedly postponed, stake.fish has begun providing staking services for other PoS and delegated PoS projects like as Tezos (XTZ), Cosmos (ATOM), and Cardano (ADA) (ADA). Poolin, on the other hand, “may temporarily discontinue supporting ETH mining” as a consequence of the PoS shift, according to De La Torre.

Other prominent ETH mining pools, including Nanopool, Ethermine, Mining Pool Hub, SparkPool, and SpiderPool, have not replied to Cointelegraph’s requests for comment.

Will the rest of the network pick up on it?

In terms of Ethereum’s ecosystem as a whole, experts ensure that the move to PoS will be simple, and network participants — casual users and decentralized apps developed on top of Ethereum — will hardly notice the difference. In an interview with Cointelegraph, Viktor Bunin, a protocol expert at blockchain infrastructure business and Libra Association member Bison Trails, shared that stance, adding:

“The Ethereum mainnet as we know it today will be introduced as a shard on ETH2 in Phase 1.5.” The only thing that will change is the consensus process, therefore DApps and users should see no difference.”

Bunin went on to say, “Any fears that the network would divide, with some people staying on the PoW chain, or that DApps will be disrupted are overstated.” In addition, O’Holleran informed Cointelegraph that “ETH 2 is a new network that will operate on a new coin and a new inflation mechanism,” adding:

“The link is that it will all be modular and compatible with the Ethereum ecosystem, and that tokens from the first network may be burnt and exchanged with tokens from the second network.” This implies that DApps and users will be unaffected unless they explicitly switch networks. The indirect and immediate influence will be on how supply and perceived value affect token prices on both networks.”

For the time being, it seems evident that there will be no scarcity of Ethereum block validators. The number of Ethereum wallet addresses that contain or exceed 32 ETH — the minimum amount necessary for staking — is reaching 120,000, according to a new analysis by cryptocurrency analytics company Arcane Research.